Listen to our Pirate Weekend

DJ’s line up for a celebration of offshore broadcasting

Radio Mi Amigo is set to return to the airwaves on 14th and 15th August in conjunction with Carillon Wellbeing Radio. Further to their previous successful radio broadcasts, this year’s 2-day Pirate Radio event on Harwich Quay has attracted a host of DJ’s who are coming from near and far to transmit from the restored Lightvessel LV18 as a tribute to the 60’s offshore radio stations. This year’s on-air team, headed by the Programme Director and Trustee Garry Lee, will bring back the popular sound of the Offshore Pirate stations that broadcast from just off our coast and were served from the Ha’penny Pier, Harwich, which is the permanent berth of LV18. Joining the crew will be two DJs from America and music connoisseurs, ex Pirate BBC Essex presenter, Tim Gillett and ex BBC Suffolk presenter, Stephen ‘Foz’ Foster.

This tribute to the Offshore Pirate Radio Stations will celebrate the likes of Radio Caroline, Radio London and several others that appeared off the coast of Harwich in the 1960’s bringing about a revolution in radio broadcasting. Following the previous Pirate Radio broadcasts from LV18, which attracted thousands of visitors to the area, Radio Mi Amigo will celebrate the watery wireless days from the studio, located on the bridge of the Lightvessel. Further to previous year’s events, LV18 will broadcast from her permanent berth by the Ha’penny Pier, Harwich, enabling members of the public to not only visit the classic vessel on the Sunday, but to meet the DJ’s.

Broadcasting from the classic heritage vessel LV18, which featured in the film ‘The Boat that Rocked’, Radio Mi Amigo will bring back the sounds of the 60’s and 70’s, the golden era of the Pirate Stations. Visitors will be able to visit the ship on Sunday 15th and view the new ‘Pirate Radio Exhibition’, which has been financed by Harwich Haven Authority via the Essex Community Foundation. The exhibition features new interactive Audio/Visual systems throughout the vessel and new interpretation signage.

In the summer of 1964, the boring world of British broadcasting was rocked to its foundations by the launch of offshore radio stations Radio Atlanta, Radio Caroline, Radio City and Radio London.

On the weekend of 14th and 15th August, a unique 2-day event will be taking place in Harwich and the Tendring sunshine coast in Essex, UK. The restored heritage Lightvessel LV18 will be hosting a radio  broadcast and exhibition celebrating the Offshore Pirate radio broadcasts from the ‘pop ships’ which were anchored just off the coast of Harwich. Tendring was very much the centre of these activities at this time with thousands of tourists sitting on the beaches of Clacton, Walton, Frinton, Harwich and Brightlingsea, listening to their favourite DJ’s on transistor radios. On August 14th this year it will be 54 years since the government closed down most of the Pirate Radio stations with the Marine Offences Act, as depicted in the film ‘The Boat that Rocked’ of 2009, which featured LV18 as part of the filming in Portland, Dorset.

The Pharos Trust has hosted many very successful ‘Pirate’ Radio events on LV18 and, along with Pirate BBC Essex over the last 20 years, have attracted thousands of visitors to the town. These previous broadcasts and have featured Johnnie Walker, Emperor Rosko, Dave Cash, Keith Skues, Tony Blackburn and many other ‘pirate radio’ celebrities. This year a host of DJ’s from near and far are joining the team, hosted by Programme Director and Trustee Garry Lee, including 2 DJ’s from America and music connoisseurs, ex Pirate BBC Essex presenter, Tim Gillett and ex BBC Suffolk presenter, Stephen ‘Foz’ Foster.

After locking down the ship to await the end of the pandemic, we want to make the most of 2021 – or what remains of it! Watch this space for news! 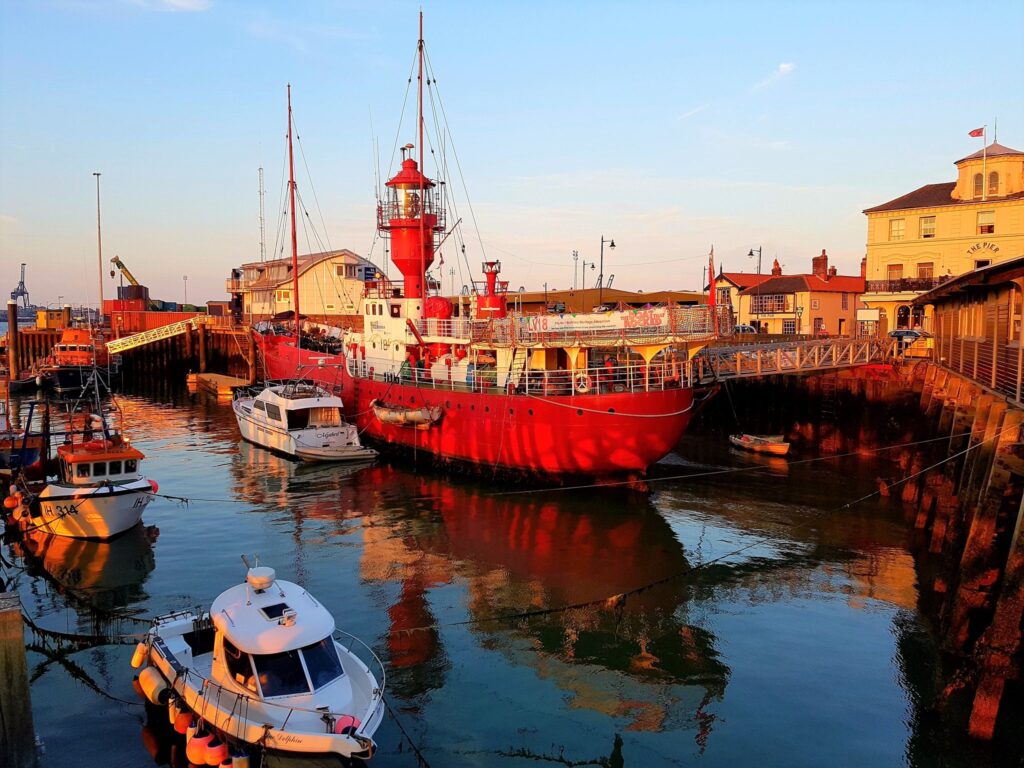